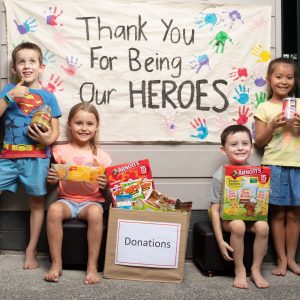 From lemonade stands and fundraiser barbecues through to stitching joey pouches for young orphaned animals, even the littlest Australians are doing their bit to support those devastated by the bushfires.

Children and educators attending Creative Garden early learning centres are activating several initiatives to support the communities from bushfire-ravaged areas. And to bolster their efforts, G8 Education who owns and operates our centres, has announced it will match all donations dollar for dollar.

The announcement is part of G8’s Bushfire Relief Package aimed to support families, team members and volunteers protecting the communities within which they operate. This follows the evacuation and temporary closures of 25 of G8’s early childhood education centres due to the current fire crisis.

As a result of the bushfires:

Creative Garden North Lakes in South Australia was among those evacuated due to threat of nearby bushfires. Team members and children from all three centres had been practicing their fire evacuation procedures in the weeks prior and the evacuations went smoothly with all children safe and well.

“Our immediate focus has been on the safety and care of the children, families and team members from our centres located in the impacted areas,” says G8 Education Managing Director Gary Carroll.

“Over the past few months we have been working closely with relevant authorities and acted quickly to ensure their safety.

“Our families and our people are at the heart of all that we do and the Disaster Relief Package is designed to lessen the burden for those who have been directly impacted by these devastating fires.”

“Our hearts go out to those impacted by the unprecedented bushfire crisis which has had all of us asking how we can help – even the youngest members of our communities,” Mr Carroll says.

“The children want to give and help out in any way they can. In fact they have led many of the fundraising activities at our centres, coming up with ideas and ways in which they can help families, wildlife and volunteer firefighters from those areas devastated by the bushfires.”

“As well as raising much-needed funds, some centres have been acting as collection points for necessary items such as food and clothing, with children even donating their favourite toys to those who have lost it all. It really is inspiring.”